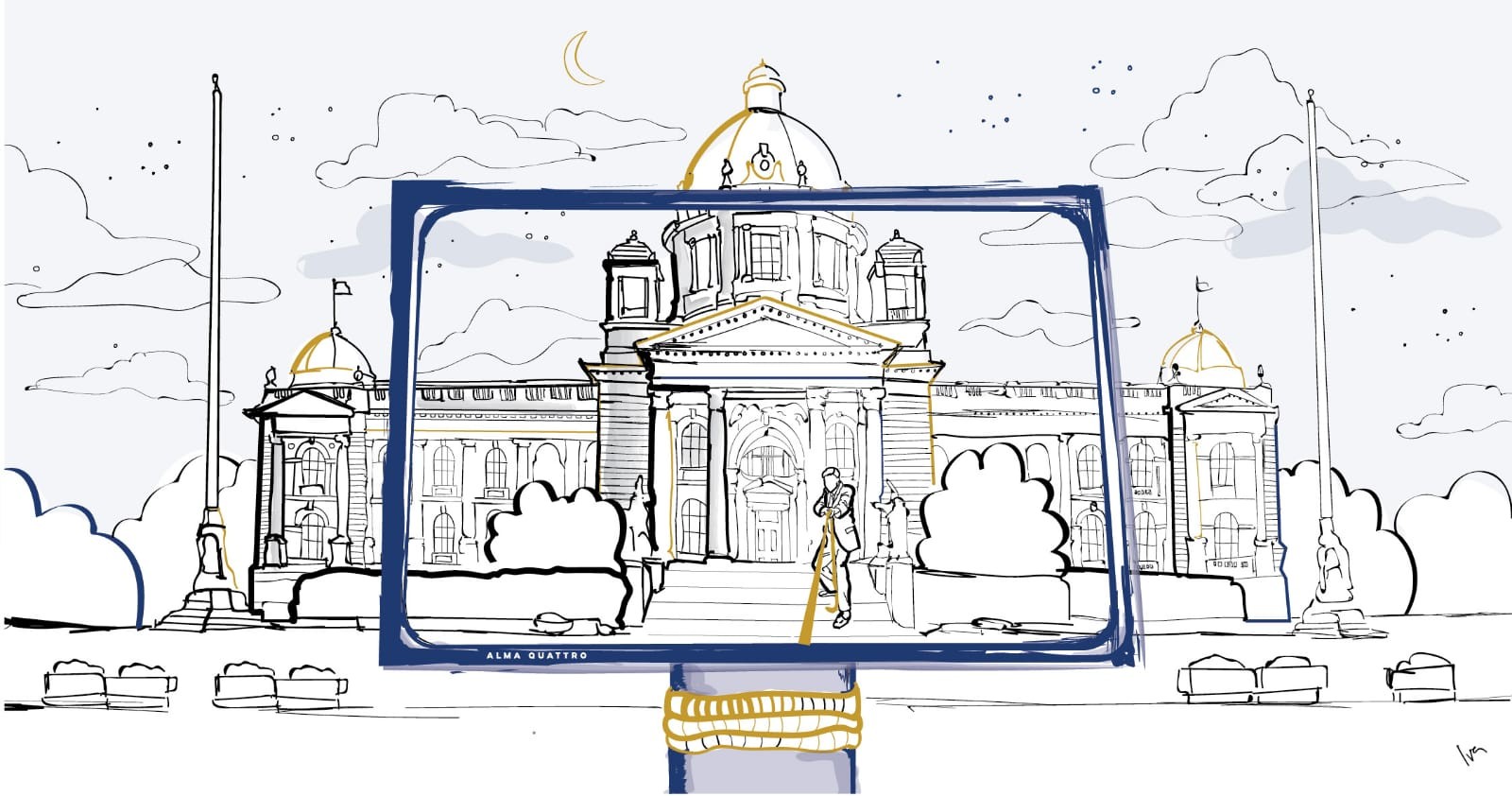 
(REALITY) THROUGH THE FRAME OF BILLBOARDS

Perhaps “Forest Gump” movie drew the best analogy of the role of outdoor advertising in our lives. Although the central character in this movie about his life, Forest Gump is also a mere participant or witness of many major historical events that shaped the time and the country he lived in.

Through Forest’s eyes a viewer can see the world he remembers or he has heard of, but slightly different - through Forest’s empirical experience. Forest’s omnipresence in all major economic and political events, as a witness or a prism of various impacts and effects, is similar to the role that outdoor advertising has had in the last 25 years in Serbia.

Scanned photo from the Greek newspaper, taken in front of RTS building during NATO bombing of Belgrade in 1999.

One segment of reality, perpetuated and put within the frame of a billboard, illuminated and non-illuminated.

The American brands were not present on our market before 2001 or at least they were not supposed to be present. The majority of global brands complied with the imposed sanctions; however, the sanctions did not prevent Nike from advertising on AQ billboards and that’s how the legendary photo was made, the photo that was seen all around the world and shown on CNN and BBC news as a cover footage for “describe the current situation in Serbia with a picture.” On the photograph a scene from the demonstrations on 5th October 2000 seemed to be caught in the frame. In a most extraordinary context, Stefan Kretzchmar’s silhouette on a 1992 advertisement with the swoosh, Nike’s logo, seems like an extra in the scene of RTS on fire and a total collapse on the streets of Belgrade. Today’s brand managers would gone through the roof if they even thought that their brand could be found in such a context, but it happened. You cannot miss the absurdity of this situation in which Nike is advertising its products in the country that had been bombed by the USA less than the year before.

That’s why it is important, or maybe instructive, to climb a ladder and cast a glance at how the world looked like through the frame of billboards and what material evidence has been left to testify about the reality that we think we remember. Outdoor advertising gained momentum in the middle of the 1990s, which means that this media archives can serve as a basis for a market analysis, but also an analysis of changes in public awareness.

In 2003 new - old familiar faces appeared on the new dinar. That change was also presented on AQ media under the slogan “The new dinar for the new age”…

… and “Again in the company of the world”, to accentuate the end of isolation of our country and its citizens and the introduction of the new convertible dinar.

It is important to say that the first Advertising Law entered into force in 2005; until then advertising was not regulated and advertising of alcoholic beverages and tobacco (the sale of which was “blooming” despite the sanctions) was allowed and on a mass scale.

By pointing to the fact that by maturation and income growth, all branches of industry become sufficiently “interesting” to the state authorities as objects of regulation, we would like to draw a parallel with the global attempt to regulate IT industry, to set the appropriate tax framework for IT companies, and to set statutory limits for the quantity of data they collect and use. Of course, in the second case the situation is of a global nature.

Once the turnover and impact of one industry reaches a critical volume, that industry becomes the focus of various institutions of the system and becomes an object or subject-matter of regulations.

However, outdoor advertising in Serbia experienced and survived that moment during the beginning of the 2000s.

The city made a decision prescribing the total number of billboards in the city of Belgrade and giving the list of locations on public surfaces where they could be installed. The amount of fees to be paid to the city by outdoor advertisers were increased and Alma Quattro took over the responsibility of maintaining the urban furniture (including bus stop shelters), and in return it was given the right to install its advertising media within bus stop shelters.

The regulations specified the distance of specific content advertisements from schools, kindergartens, and health care institutions.

Until then, primary schools in the city centre allowed the installation of advertising panels in school yards and on school building walls in order to earn additional income. According to the new regulations, hospitals, school, and other public institutions could not use their assets and resources for advertising purposes.

Fun fact: According to Vladimir Čeh (who participated in the draft law preparation), the moment the law entered into force, the actual value of the advertising market in the country was 80 million Euros, whereof 52 million were spent on TV, 15 on printed media, 9 on OOH, 3 on the radio, and only 1 million on “other media”.

After a brief introduction, the following chapter will be dedicated to the first cycle of advertising on OOH media, i.e. the time when ads for cigarettes and alcoholic beverages dominated the billboards …