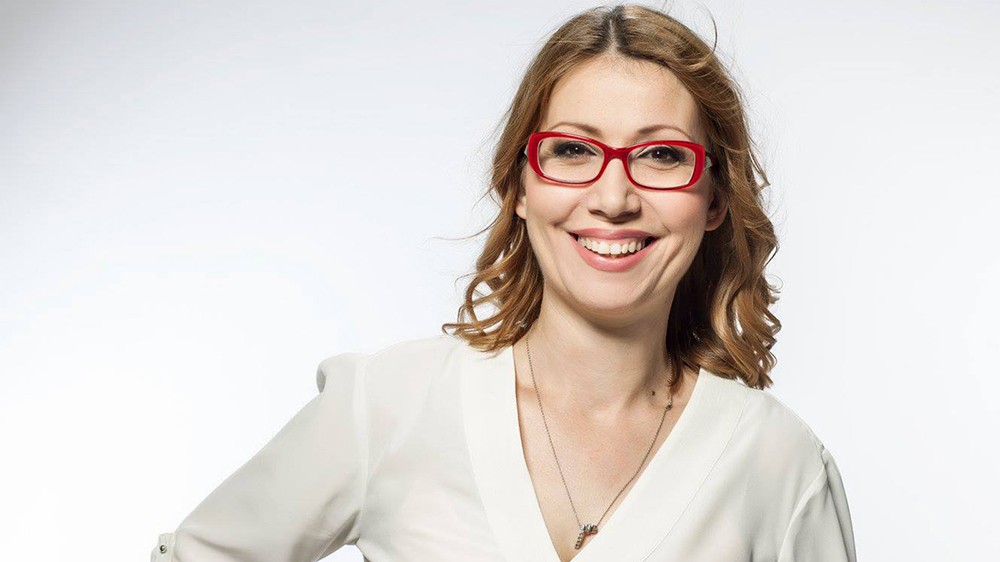 
THE ADVERTISEMENT THAT MADE LADIES AT THE AIRPORT CRY

Tamara has worked since she was 22, first at Reemtsma representative office (for some famous cigarette brands), and then with us. She is the creator of “bed sheets”, which used to serve as the company’s sales success indicators until Alma installed the system with programs that do the work instead of us. Now, almost 20 years later, Tamara is a mother of three kids and a fantastic sales manager.

I had my first “serious job”  at Driskal company - Reemtsma representative office,  the representative of Davidoff and West brands. My first contact with Alma Quattro was indirect and it happened   during the time I worked there. Within Driskal there was a marketing agency called Run, which was doing some design work for Alma Quattro’s  catalogue of OOH media, so I occasionally met with Dejan Petrović and Sanja Pešić.

It was like all the roads lead me to Alma. After a certain time, Gordana Jovanović (then her surname was Jocović) came to work at Driskal, and now we work together at Alma. I worked as a business secretary, I was 22,  and everything was an endless fun to me. Our office was in a villa at Dedinje, we watched Formula 1 races (West was their sponsor), organised parties as promotional activities for both brands we represented, etc. In addition to standard secretarial duties, my job was also to participate in everything, to organise, to make bookings, etc.

I joined AQ’s team indirectly: Sanja, the CEO,  needed someone to work at Air Media (AQ’s subsidiary), which was specialised in OOH advertising within closed systems – the Belgrade Fair and Belgrade Airport.

The two of us were the team in charge of all the operations: sales, invoicing, reporting, contacts with an accountant, going to the then Social Accounting Service (the payment operations office), etc.

The name of the company was always interesting to people when pronouncing it.  Once I was at the Social Accounting Service standing in a queue and waiting to  withdraw some cash. When we were the next customer, the lady at the counter shouted at the top of her lungs pronouncing the name of our  company as it was written in Serbian: “Aaiiirrr mediieee”.

Our company had a phenomenal slogan: “It can be seen from a plane”, which referred to the connection with the airport and the high visibility of our media at the airport.

I remember one campaign that made the women employees of the Belgrade Airport cry.

One guy who had come from the USA called us and said that he wanted to surprise his girlfriend who worked at the airport with a poster on the backlight in front of the airport building.  Although we were reluctant to paste posters with personal ads on our media, back then we did not have the official policy that would prohibit us to do it and we relented. The poster was black and the only content was the text (message) he wrote to his girlfriend.  When the poster was pasted on the billboard, the ladies who worked at the airport called us crying and saying: “You did the wonderful thing, all the women at the airport are crying”.

When we became affiliated to Alma, I learnt how to work with big clients, with the significantly bigger media network, and with the entire different sales and planning strategy. However, that period was marked by reporting.

In addition to reports made for the Airport, we came up with an idea to make reports in Excel file in which we kept the booking records, because we didn’t have the software that calculated numbers we used as indicators. There we already had the information on locations, types, and numbers of bookings, and if we added prices, discounts, averages, breakdowns by cities and by media, we would get the relevant figures and amounts. It was an enormously big document, such a large table that we called it “a bed sheet”. It was a very important document, because when we added all campaigns and parameters, we would get the so-called “presales”. It was the value of what we had sold and we didn’t have to wait for the colleagues from the financial department to add up all the invoices. Therefore, my colleagues used to ask: “Tamara, when will the bed sheet be ready?”

Clients cannot see some things that we find extremely important and that we cherish within the company. To me the most important are empathy and fellowship. When a big campaign is confirmed, when we get an important client, we shout, hug, applaud, we are all happy.

I must admit that at the beginning I didn’t know how to express that joy, or perhaps it had not been so important to me until this entire corporate story became “mine”. Not long ago we were waiting for the confirmation of one big campaign and the agency was informing us in stages: that the client was pleased, that he would probably confirm, that he verbally confirmed the campaign, etc. I caught myself blaming them for not telling us about the confirmation at once,  so I could truly rejoice.

We also show empathy to our community through free campaigns for those involved in charity work, non-profit activities, or something important for the general public, but who cannot afford campaigns. We make our contribution by placing their campaigns on our media for free and by covering printing and poster pasting costs.

Once I was contacted by a dance group which was famous during the 1990’s. They asked for our support to organise a charity contest for children. We agreed to cooperate and for days my colleagues were joking that I was sponsoring a dance group.

When I mention empathy, I also have to mention my personal story. Our clients and associates know that I have three children and that I was on maternity leave three times during my employment at Alma Quattro.

Alma supported me every time without any problems, for which I am very grateful to the management of the company. Although every mother is entitled to maternity leave and support, unfortunately we are witnessing that such good treatment is an exception in our society.

The unwritten rule that people are accepted as whole persons, with all their differences, is the reason I have been part of Alma for so long, and I am convinced that my colleagues share the same opinion. This attitude also reflects on our relationship with clients: with every client we establish and develop a specific relationship, a specific way of booking, selecting positions and campaign periods,  some clients like to hear all options, some clients request only a plan that meets their defined criteria, and some clients wish to see every location and to hear why it is important. With some clients we finish the whole process by phone and via email, while there are some clients who want to come to see us for every stage in the process, who like to go to the printing company with us, even though that is the first time they see the printing process. They simply like to be part of the work.

The important segment of sales is to know how to recognise the sensibility of  every client and to make adjustments in order to close a deal successfully and finish the work effectively.