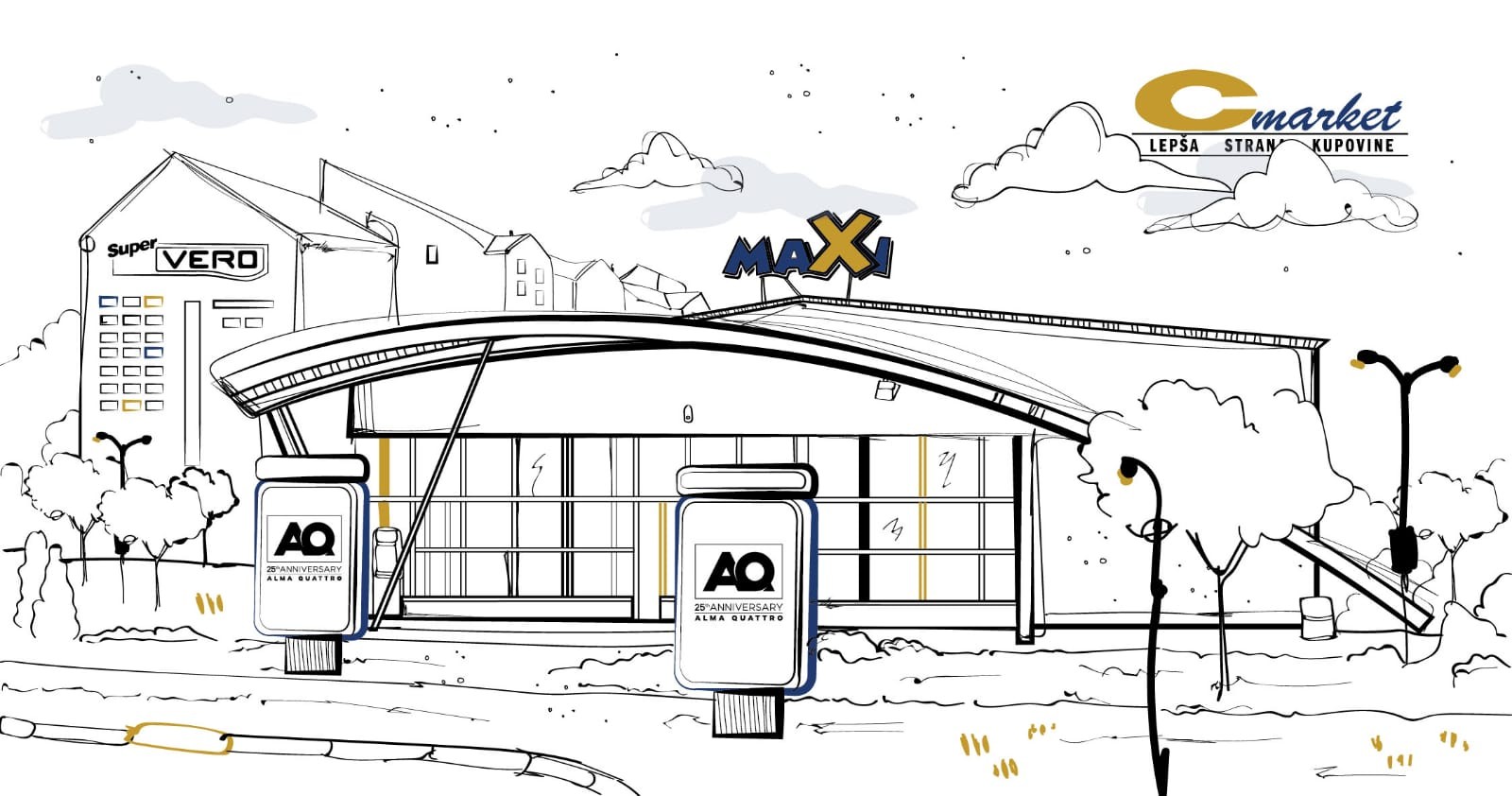 With the appearance of new retail chains, competitors of the famous C Market and Pekabeta, a new chapter of OOH was opened in Serbia - advertising within closed systems.

In 2002 Super Vero (today’s Veropoulos and Jumbo) opened its first hypermarket in Serbia with the location in Novi Beograd.

Those years we came up with an idea to enter a new segment of our advertising business – “advertising within closed systems.” In addition to public surfaces where we had already been present, this time we entered the space of Veropoulos hypermarkets, the first closed system with which we established cooperation. The cooperation implied the installation of citylight media on the lampposts of the retail outlet’s car park.

Citylight media on the lampposts on the car park in front of the retail outlet.

Remark: Within the context of economic affairs and situation, the Greek and Yugoslav Governments made an agreement within the Hellenic Plan to invest 250 million Euros in the Republic of Serbia. At that time, Alma Quattro was a joint venture of the Greek company Alma Media Group and the Serbian company Euro Quattro.

The next agreement of that kind was made with Maxi supermarkets, which were owned by Delta Holding at that time. We had an excellent cooperation with Delta Holding, given that the group had a wide portfolio of companies which were our clients – advertisers. Additionally, they also represented brands such as Fiat, Nike, and Beiersdorf (Nivea) which were not directly present on the market at that time.

One of the first Maxi retail outlets opened in 2002.

Fun fact: The first Maxi retails outlets were prefab buildings positioned in different parts of Belgrade and in towns all over Serbia. The first visual identity of Maxi retail outlets was in blue and yellow, and these colours were very similar to the colours of C market’s trade name (C market was still active at that time). You will also notice the domain of the website co.yu, the domain of the country/state which no longer exists.

We made a cooperation agreement with them to install the media within Maxi retail outlets network, not only in Belgrade, but throughout Serbia. We had that freedom and capacity to choose the most attractive retail outlets and on their land we installed the media showing the way towards Maxi outlets, but also communicating well with trunk roads and main streets in these towns. Thus we increased the potential in the countryside and got a big number of high quality positions for our panels given that Maxi retail outlets were situated at central locations in the towns and cities in the countryside.

A billboard with an advertisement for Jelen Beer on the land of Maxi retail outlet in Čukarica, Belgrade.

Additionally, the contract also included the installation of billboards on the buildings of outlets “facing” their car parks.

And citylight media at the entrance to Maxi retail outlets.

A three-side citylight in front of the entrance to a Maxi retail outlet.

The contract was renewed every year and this network is still part of our AQ network. However, over the years, the network underwent various modifications, i.e. it was adapted to the market requirements. For instance, we removed the above-mentioned billboards from Maxi buildings as they did not prove so attractive. Our initial assumption that the billboards would be rented by retail outlets for the promotion of their discounts and special offers was not lucrative. It turned out that clients, i.e. their media agencies rented the media when promotional activities were planned in a certain outlet. Retail chains were not involved in that business. Clients who most often advertise on such locations are those whose products can be actually found on the shelves of those outlets. Non-alcoholic beverages, coffee, confectionary products, dairy products, detergents, etc. Essentially, FMCG industry.

The opening of new retail chains influences the increased activities in all media and it is also reflected on outdoor advertising budgets. The most recent example which stirred the local market was the concurrent opening of 14 LIDL outlets in Serbia last year. LIDL is a big advertiser who carefully planned an integrated campaign with a significant OOH share. Their activities had a direct impact on the entire FMCG industry. As evidence of that, one year before LIDL’s appearance on the market, Delhaize had devotedly and carefully planned its response regarding the strategic covering of certain directions and continuous presence on the market with the planned change of advertisements in order to inform consumers about its special offers and discounts.

As far as communication in retail outlets is concerned, advertisements usually communicate with consumers directly, they have the selling character, and they change very fast, following special offers in outlets. It is usually like that, but not always; therefore, even in this fast industry you can see innovative solutions that push the boundaries, such as a bakery on a bus stop from which a wonderful smell of pastry is spreading around. In addition to the branded bus stop shelter, within the branded zone, the innovative solution included the release of the aroma of freshly baked pastry “luring” people to taste it.