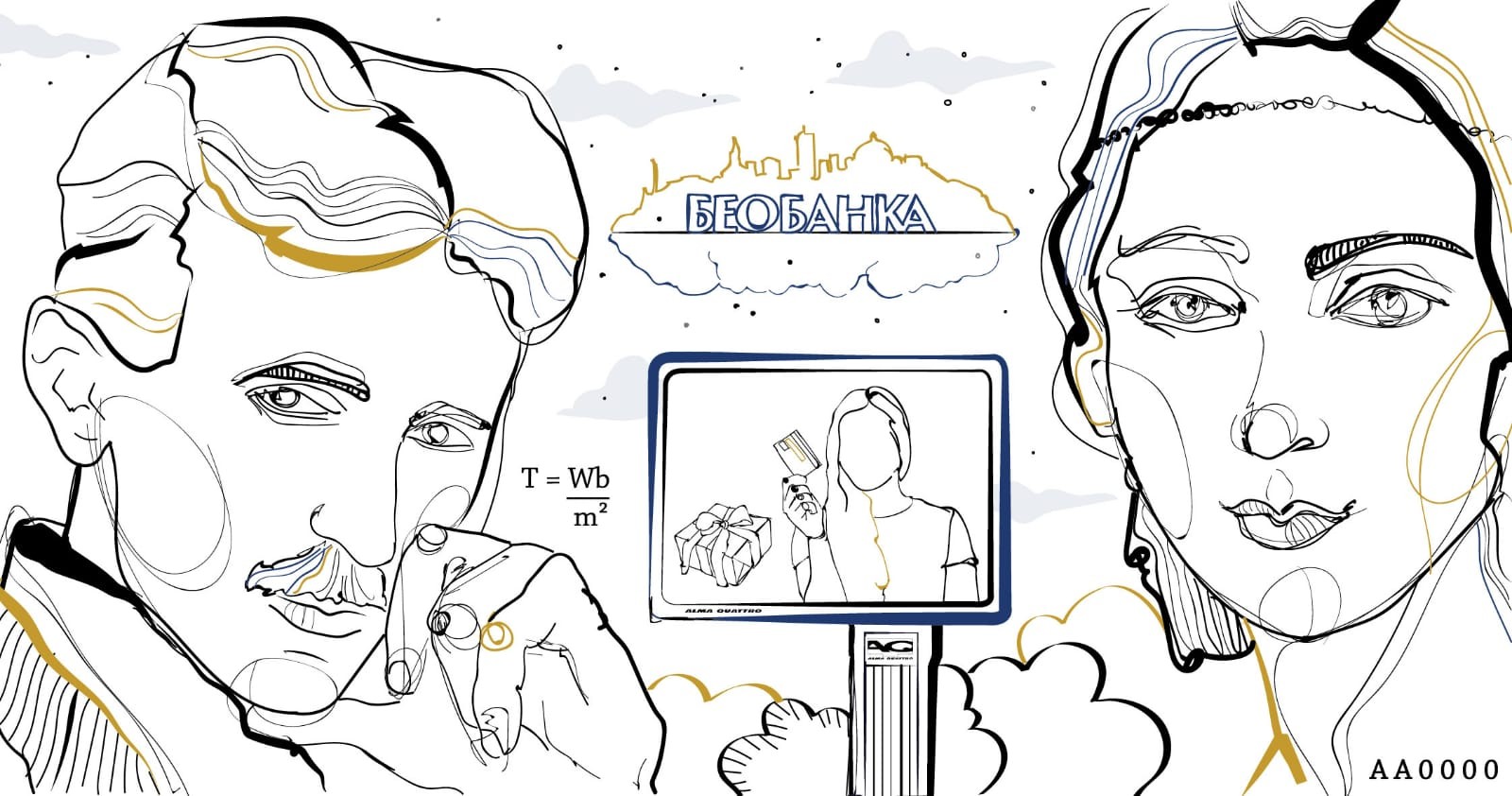 
HOW A BANK CAN FEEL A PULSE

Money. The driving force of economy or the source of all problem - it depends on the point of view. There is a business which deals with disposing of someone else’s money, and that banking. Beside retail chains and telecommunication industry, the banking sector experienced an expansion after 5th October 2000. If we look at and analyse advertisements over time, we can also have a picture of the macroeconomic situation in the country. Banks were always in tune with what was best to market and offer at every moment.

It may sound as a paradox, but banks were important advertisers in the times of turbulences on the financial market and in the times when the economy was not at its best.

The opening credits of the series “Otvorena vrata” (The Open Door) with Beobanka as a sponsor.

In the introductory article we mentioned that in 2003 the Serbian dinar got a new look with new faces on banknotes announcing the period in which its value would be stable and the currency would become convertible.

In that period of transition (although, an observer can justifiably claim that we are still in transition), the cult of the German mark was replaced by the new currency of the European Union, a Euro.

The market’s spontaneous reaction to these changes was that almost overnight countless exchange offices were opened in Belgrade. Belgrade was virtually a kiosk city. People exchanged old dinars for new ones, German marks for Euros, etc. It was ridiculous that you could find an exchange office at any corner to exchange the money…. well, the money you did not have. When that period was over, kiosk-exchange offices were disappearing, one by one. Perhaps the people became a bit more confident about the currency and they did not have to exchange 10 German marks (or Euros) every day in order to survive.

The important progress for the market was the beginning of business of Western Union and MoneyGram, companies dealing with international money transfer.

When Western Union was preparing to enter this market, its idea was to start with an aggressive and expansive campaign. Eventually they decided to use a standard campaign format and standard solutions. It is also interesting that when WU began with its business operations, you could transfer money, with a commission, only in one direction – from Serbia to a foreign country.

Banks appeared when they realised that the dinar could really be a convertible currency. At that period the Greek capital was strong in the country, the most prevalent were Greek banks – Alpha bank, EFG Eurobank, Piraeus bank, National Bank of Greece (NBG bank), Findomestic bank.

For example, EFG Eurobank’s advertisement was lightening the path with the slogan “Safe support”.

Atlas Banka was one of the first clients who had their advertisements within the closed system of media in the interior of Belgrade Airport. Its landmark was a backlight on the access to the airport with an institutional solution. They never had any product campaign, but they had that same panel at the airport for years.

Conditioned by the macroeconomic situation on the market, in the first years of the banking sector’s revival, banks were waging a war over interest rates.

Especially during the Savings Week. The Saving Week was the first week of November, and banks were racing with favourable offers of interest rates for savings and deposits. Will the interest rate be 5.5% or 5,65%? That number (digit) was kept as the top secret. They would send their conceptual designs for ads at the last moment calculating what competitors could offer. At the peak of the savings wave, the Savings Week became the Savings Month and, therefore, the whole November was marked by the campaigns of various banks that were operating on the market.

At the moment when consumption became important, payment cards became important too. The bank campaigns were focused on those magic, plastic cards that offered the possibility of “carefree” spending in instalments - Visa, Mastercard, Diners … At the same time, it was also a slow withering of cheques as a payment instrument.

Speaking about payment cards, we must mention the first domestic payment card, DINA card, launched in 2003.

After that, when the people stood on their feet and accumulated a bit of cash, banks opened their leasing departments and started with campaigns for the modernisation of the rolling stock of Serbia by offering car purchase leasing.

Housing loans are still a topical issue and one of the most noticed campaigns was: “Take a loan and everything will be okay”. Meanwhile, we have had a crisis regarding housing loans in Swiss francs and still feel the consequences.

When the country stimulated self-employment, banks had the campaigns offering loans as potential solutions for entrepreneurship.

Not all the banks stuck to the proven formula in communication. There were some exceptions. One of them was the campaign for Vojvođanska Banka, a series of videos directed by Srđan Dragojević. Well, take a look yourself.

The public opinion was polarised as usual. Some thought that the commercial/add was ingenious, while others thought it was scandalous. In any case, it was unusual for the conservative banking system which builds its credibility by seriousness and thus tries to convince you that you can safely entrust your money to them.

During one period important advertisers on our network were Banca Intesa, Societe General, Raiffeisen banka (with the precursors of digital LED media, i.e. innovative solution). For the last couple of years, the most stable advertisers among banks have been Pro Credit, AIK banka, Erste, and Sberbanka.

Banks are excellent at feeling the pulse of the market and the capacity of spending … or saving. At this moment, the economy stimulates us to spend as much as possible and use payment cards. Nobody on the market advertises savings. As the economic situation changed, the contents of campaigns changed as well. Through a prism of these campaigns we can draw conclusions about the broader social and economic situation, if we know how to observe.

Advertisements are direct, but the context and our capability of reading between the lines are also important. Thus, things become much clearer and sometimes we can even predict things.